armitage takes the blame for ‘plamegate’ 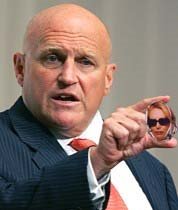 Confirming he was the source of a leak that triggered a federal investigation, former Deputy Secretary of State Richard Armitage said he never intended to reveal Plame Wilson’s identity. He apologized for his conversations with syndicated columnist Robert Novak and Washington Post reporter Bob Woodward.

He said he did not realize Plame Wilson’s job was covert.