softening us up for torture, 24 hours at a time 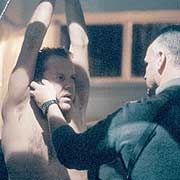 from lew rockwell: In general terms, the formula is this: each 24-hour season features a supervillain who’s intent on destroying the world by using various forms of nightmare-inspired WMD… usually bear[ing] a remarkable resemblance to whatever happens to garner the direst rhetorical attention by Bush at that time.

To apprehend the supervillain, Jack stoically breaks obtrusive, obsolete rules… As you can imagine, these storylines offer repeated opportunities to illustrate timely debate topics from the public consciousness, especially during a never-ending “War on Terror”: the setting for the show is the Los Angeles “Counter Terrorism Unit” (oddly enough, foreshadowing our Department of Homeland Security)… In one of the principle plotlines, the writers attempt to prop up the notion of the unitary executive incarcerating indefinitely and torturing any citizen whom he labels an enemy combatant (Newspeak for “terrorist”) during times of great exigency.

They contrive a perfectly worst-case scenario to demonstrate Bush administration logic: namely, that because it’s theoretically possible that a single man, woman, or child, if tortured, could reveal information about a terrorist plot which could potentially save innocent lives, then any amount of coercion is therefore justified to compel that individual to surrender whatever useful information that he might be hoarding…

Their torture rationale continues that if the unitary executive has the authority to enforce his discretion in the course of prosecuting a “war” (even if undeclared by Congress), then he can also withhold details about the intelligence that led to this discretionary action in the first place – all in the name of protecting national security…

People who consider themselves to be conservatives should beware: if another Clinton-analog presidency occurs, it’s not too difficult to imagine scenarios where these law enforcement tactics will be applied to anti-abortion activists, gun rights enthusiasts, the Minutemen, taxpayer protection groups, some new Branch Davidian group, and others like them. (And incidentally, that’s when the Patriot Act will really come to fruition.)

Even better, I know that most people won’t complain, because they already saw something just like it on 24.