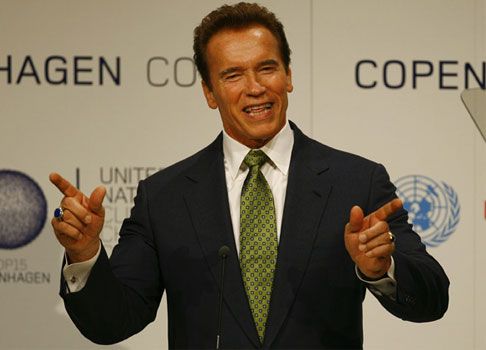 from independent.co.uk: Arnold Schwarzenegger is facing allegations that a £204bn investment
fund that he once held a stake in is a major investor in 20 of the most
well-known companies involved in the logging of the world’s rainforests.

The Terminator actor reinvented himself as the state of
California’s most environmentalist governor during his time in office,
spearheading anti-global warming legislation and helping to bring in the
Governors’ Climate and Forests Task Force, in an attempt to reduce
deforestation in Indonesia and Brazil.

But campaigners say Mr
Schwarzenegger held more than $1m (£606,000) worth of stock in
Dimensional Fund Advisors (DFA) until 2011. The company holds $174m
worth of shares in 20 of the 50 major logging companies, according to
new research by campaign group Global Witness.

Global Witness says the Norwegian Government Pension Fund Global
disinvested from at least four of the companies DFA had shares in,
including Ta Ann Holdings and WTK Holdings. The reports submitted by the
ethics council suggest this was due to an “unacceptable risk” that each
company is “responsible for severe environmental damage.” Other
companies DFA has shares in have been linked to destructive or illegal
practices, according to the campaign group.

“The industrial-scale
deforestation caused by some of the companies that Mr Schwarzenegger
profits from accelerates the climate change that he wants to stop. In
environmental terms, it’s a weaponised contradiction,” said Andrew
Simms, chief analyst of Global Witness’s environmental programme.

A
spokesperson for DFA said they are “not aware of any companies from the
Global Witness list held in Dimensional portfolios that are engaged in
illegal activities related to deforestation. We expect publicly listed
companies to comply with their legal and regulatory obligations.

“Anybody
with information regarding possible illegal activities should report
them to the appropriate legal, regulatory and judicial authorities.”

The Independent had not received comment from Arnold Schwarzenegger at the time of publication.