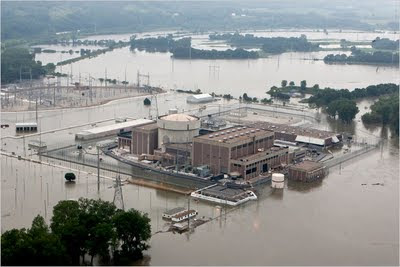 as nuclear plants face floods, are we inches away from ‘fukushima USA’?

nuke plant close to being totally flooded, but saved - for now

from raw replay: Two U.S. nuclear electricity facilities, the Fort Calhoun and Cooper nuclear plants in Nebraska, are facing the threat of rising flood waters from the Missouri river. Though safety regulators insist the plants were designed to withstand flooding and no risk of disaster exists, the Federal Aviation Administration (FAA) has been enforcing a no-fly zone over the Fort Calhoun plant since early this month, even though the plant has been shut down since early April for refueling. That may be due in part to a reportedly minor fire at the plant which temporarily knocked out pumps that inject cool water into a pool of used nuclear fuel — or it may be due to something else entirely. The FAA reportedly told “Big Picture” host Thom Hartmann that it was maintaining the aircraft ban for security reasons, and the U.S. Nuclear Regulatory Commission has insisted there was no danger to people in surrounding areas. But that still begs the question: Why would anyone build a nuclear plant so close to a river - or any other potentially dangerous region?