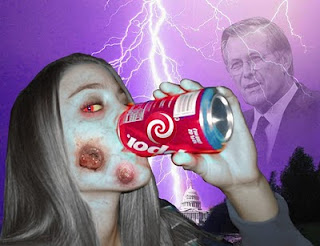 from natural news: In response to growing awareness about the dangers of artificial sweeteners, what does the manufacturer of one of the world’s most notable artificial sweeteners do? Why, rename it and begin marketing it as natural, of course. This is precisely the strategy of Ajinomoto, maker of aspartame, which hopes to pull the wool over the eyes of the public with its rebranded version of aspartame, called “AminoSweet“. Over 25 years ago, aspartame was first introduced into the European food supply [16kb PDF]. Today, it is an everyday component of most diet beverages, sugar-free desserts, and chewing gums in countries worldwide. But the tides have been turning as the general public is waking up to the truth about artificial sweeteners like aspartame and the harm they cause to health. The latest aspartame marketing scheme is a desperate effort to indoctrinate the public into accepting the chemical sweetener as natural and safe, despite evidence to the contrary.

One response to “aspartame renamed ‘aminosweet’ – being marketed as natural sweetener”