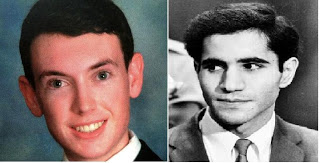 "....Holmes [picture, left] could have been drugged merely to set him up as the patsy, in which case, he committed no crime at all. He could have been drugged and programmed prior to him visiting a psychiatrist at the U of Colorado. In that scenario, the basic op was enforced by psychiatric “boosters” involving, perhaps, hypnosis. Or Holmes was indeed programmed to kill and become the patsy, allowing other shooters to escape—but Holmes didn’t, finally, carry out the murders."

"This last scenario resembles what happened in the 1968 assassination of Robert Kennedy. Sirhan Sirhan, the patsy, did in fact have a gun at the Ambassador Hotel. But he was standing in front of RFK in the kitchen, and the shots that killed RFK came from behind. Sirhan had kept notebooks in which, prior to the assassination, he revealed an obsessed and apparently dissociated state of mind."

The present writer commends Rappaport for keen observations (e.g. both kept notebooks) in drawing parallels to Sirhan Sirhan (picture, right), a long suspected mind-control victim, the patsy who took fall  for "The Robert F Kennedy Assassination."  Rappaport widens our view of inquiry and couldn't agree more when he doesn't apologize:

"To even suggest Holmes may be a mind-control subject brings immediate criticism, to which I would offer this counter: why accept the scenario of the crime put forward by the Aurora police? Why do they deserve the benefit of the doubt? Why limit and narrow the investigation to their story?"

The Aurora Shooting is bizarre incident! The alleged perp, James Holmes, appears to have been subjected to a meat grinder while incarcerated? Rappaport has every cause to consider far flung explanations, when Holmes studied very subject matter he may have fallen victim? Is James Holmes a case of the elite sacrificing one of their own?