Military Flying Drones Throughout US 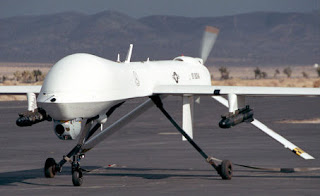 Steve Watson reveals in article, “New Documents Show Military Is Flying Drones Throughout US.”  “Thousands of pages of Federal Aviation Administration (FAA) documents released under the Freedom Of Information Act highlight that the military is extensively flying surveillance drones in non-restricted skies throughout the country…three branches of the military are operating drones within civillian airspace. Those branches are the Air Force, the Marine Corps, and DARPA (Defense Advanced Research Projects Agency),”  gleaned from documents released by the Electronic Frontier Foundation informs article.  Drones flying America’s skies aren’t simply small ones used for surveillance, but as Watson reports:

“…most disturbingly, DARPA, according to the documents, is flying full sized Reaper drones in areas of Nevada, California and Utah that are able to use technology that can capture motion imagery of entire cities. The technology, known as “Gorgon Stare” uses an array of nine to twelve cameras attached to the drone to take concurrent footage from multiple different angles.”

Gorgon Stare can record from 12 cameras, simultaneously.  The Air Force will not stop there, however, “but as crazy as that is, Darpa is working on a project that could put Gorgon Stare to shame. The ‘Argus’ program, recently highlighted by David Hambling, uses 92 cameras at once…,” as reported in a Danger Room article.

Watson goes on to add in his article:

“Feeds from those drones can be fed into artificial-intelligence software developed by DARPA known as the ‘Mind’s Eye project‘, which can analyze all the data at once, meaning that essentially a machine can keep watch over everything happening in an entire city.”

Can you say national surveillance state? Gorgon, by the way, is word derived from Greek “gorgos,” which means dreadful – how appropriate!