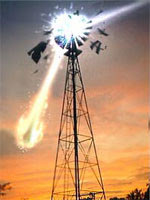 The Aurora, Texas Crash of 1897 was part of a wave of mystery airship sightings that swept across the United States. The original story, as reported by S E Haydon, an Aurora resident, states that "about 6 o'clock this morning the early risers of Aurora were astonished at the sudden appearance of the airship which has been sailing around the country. It was traveling due north and much nearer the earth than before...It sailed over the public square and when it reached the north part of town it collided with the tower of Judge Proctor's windmill and went into pieces with a terrific explosion, scattering debris over several acres of ground, wrecking the windmill... The pilot of the ship is supposed to have been the only one aboard and, while his remains were badly disfigured, enough of the original has been picked up to show that he was not an inhabitant of this world." The 'pilot' was given a funeral and buried in the local cemetery. The story faded away until Bill Case, a Dallas Times Herald writer and state MUFON director, revived interest with a 1973 investigation.

The Aurora crash illustrates how a small town's attitude can impact objective appraisal. Some residents maintained "it never happened," while details are bandied about such as Judge Proctor's windmill and the alien grave. Barbara Brammer, a former Aurora mayor, suggests Haydon wrote a hoax article in an attempt to save a dying town. Author Jim Marrs, who resides in the area, cleared up some issues in a 2009 presentation. Marrs, an able storyteller, clarified Judge Proctor didn't have a windmill, per se, but a windless windmill. There was, in fact, a headstone and Marrs shows pictures of it before it disappeared in the seventies. A cigar-shaped ship with windows on its side was etched on the headstone much like Reinhold Schmidt's 1957 sighting near Kearney, NE. A 2008 UFO Hunters episode, called First Contact, provides a nice viewable summary of the facts.

Many articles leave the 1897 Aurora Crash as an unresolved mystery. Kevin Randle provides a debunker's argument with good points. But a charred and disfigured tree with embedded metal on the Oates property, which was formerly Judge Proctor's farm, certainly gives the opposite impression: that something did, indeed, hit there.