the real cowboys and aliens 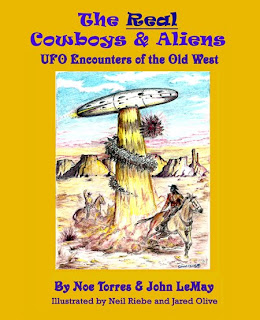 New Mexico historian John LeMay and Texas UFO researcher Noe Torres, the authors of "The Real Cowboys & Aliens: UFO Encounters of the Old West", the book that explores "fourteen bizarre incidents, including the reported recovery in 1897 of a spaceship and its alien pilot in the Texas frontier town of Aurora."  Clyde Lewis interviewed Torres and LeMay on Ground Zero Live and wrote the accompanying article called "Aurora". The featured incidents, taken from over a thousand compiled cases, include: an underwater UFO that nearly electrocuted two men in 1893 near Tacoma, WA., a UFO explosion in 1891 over a Texas Cotton Gin and Bigfoot from Outer Space, a 1888 incident related by Native Americans. It seems, in retrospect, that Hollywood missed an entire genre completely: cowboys and aliens!