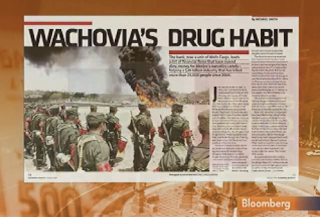 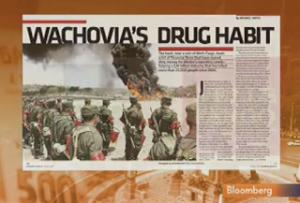 from bloomberg: Just before sunset on April 10, 2006, a DC-9 jet landed at the international airport in the port city of Ciudad del Carmen, 500 miles east of Mexico City. As soldiers on the ground approached the plane, the crew tried to shoo them away, saying there was a dangerous oil leak. So the troops grew suspicious and searched the jet.

They found 128 black suitcases, packed with 5.7 tons of cocaine, valued at $100 million. The stash was supposed to have been delivered from Caracas to drug traffickers in Toluca, near Mexico City, Mexican prosecutors later found. Law enforcement officials also discovered something else.

The smugglers had bought the DC-9 with laundered funds they transferred through two of the biggest banks in the U.S.: Wachovia Corp. and Bank of America Corp., Bloomberg Markets magazine reports in its August 2010 issue.

This was no isolated incident. Wachovia, it turns out, had made a habit of helping move money for Mexican drug smugglers. Wells Fargo & Co., which bought Wachovia in 2008, has admitted in court that its unit failed to monitor and report suspected money laundering by narcotics traffickers -- including the cash used to buy four planes that shipped a total of 22 tons of cocaine.

The admission came in an agreement that Charlotte, North Carolina-based Wachovia struck with federal prosecutors in March, and it sheds light on the largely undocumented role of U.S. banks in contributing to the violent drug trade that has convulsed Mexico for the past four years.