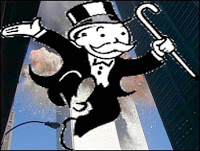 from new york times: JPMorgan Chase announced today that it has struck a deal to build a skyscraper near ground zero and move its investment banking headquarters from Midtown.

Gov. Eliot Spitzer, in making the announcement today, said the company’s “commitment to locate its investment banking headquarters at the World Trade Center represents another step forward in revitalizing ground zero and ensuring that New York remains the financial capital of the world.”

The bank’ $2 billion, 42-story, 1.3 million-square-foot tower is set to rise at the corner of Greenwich and Cedar Streets, the site of the soon-to-be demolished former Deutsche Bank building. The building will include six trading floors totaling 360,000 square feet.

Chase plans to move thousands of executives from its Midtown offices at 277 Park Avenue to Lower Manhattan, in what is widely regarded as a lift for the downtown district. It will keep its world headquarters at 270 Park Avenue.