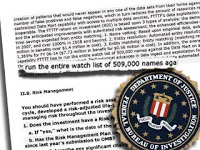 from abc: A terrorist watch list compiled by the FBI has apparently swelled to include more than half a million names.

Privacy and civil liberties advocates say the list is growing uncontrollably, threatening its usefulness in the war on terror. The bureau says the number of names on its terrorist watch list is classified.

A portion of the FBI's unclassified 2008 budget request posted to the Department of Justice Web site, however, refers to "the entire watch list of 509,000 names," which is utilized by its Foreign Terrorist Tracking Task Force.

A spokesman for the interagency National Counterterrorism Center (NCTC), which maintains the government's list of all suspected terrorists with links to international organizations, said they had 465,000 names covering 350,000 individuals. Many names are different versions of the same identity -- "Usama bin Laden" and "Osama bin Laden" for the al Qaeda chief, for example.

In addition to the NCTC list, the FBI keeps a list of U.S. persons who are believed to be domestic terrorists -- abortion clinic bombers, for example, or firebombing environmental extremists, who have no known tie to an international terrorist group.

Combined, the NCTC and FBI compendia comprise the watch list used by federal security screening personnel on the lookout for terrorists.

While the NCTC has made no secret of its terrorist tally, the FBI has consistently declined to tell the public how many names are on its list. Because the number is classified, an FBI spokesman told the Blotter on ABCNews.com, he was unable to comment for this story.

"If we have 509,000 names on that list, the watch list is virtually useless," he told ABC News. "You'll be capturing innocent individuals with no connection to crime or terror."

U.S. lawmakers and their spouses have been detained because their names were on the watch list. Reporters who have reviewed versions of the list found it included the names of former Iraqi dictator Saddam Hussein, at the time he was alive but in custody in Iraq; imprisoned al Qaeda plotter Zacarias Moussaoui; and 14 of the 19 Sept. 11, 2001 hijackers, all of whom perished in the attacks.

"There's a reason the FBI has a '10 Most Wanted' list, right? We need to focus the government's efforts on the greatest threats. When the watch list grows to this level, it's useless as an anti-terror tool," Sparapani said.