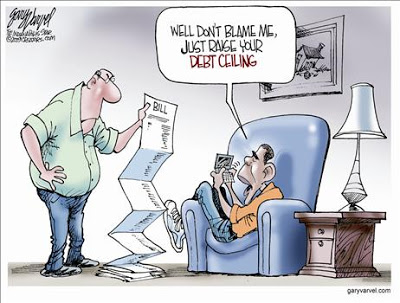 banksters warn US to hit debt ceiling by may16

from reuters: The United States will hit the legal limit on its ability to borrow no later than May 16, Treasury Secretary Timothy Geithner said on Monday, ramping up pressure on Congress to act to avoid a debt default. "The longer Congress fails to act, the more we risk that investors here and around the world will lose confidence in our ability to meet our commitments and our obligations," Geithner said in a letter to congressional leaders. "Default by the United States is unthinkable."

Previously, the Treasury had forecast that the $14.3 trillion statutory debt limit would be reached between April 15 and May 31. As of Friday, Treasury borrowing stood just $95 billion from the ceiling. Some Republican lawmakers have sought to use the need to raise the debt limit as a lever to pressure the Obama administration into agreeing on large-scale budget cuts.

The debt-limit showdown comes as Congress struggles to complete a spending package that would keep the government operating beyond Friday. Republicans are seeking to use that bill to enact deep spending cuts and lawmakers are focusing on a proposal to trim this year's budget by $33 billion, a relatively small amount compared with a projected $1.4 trillion deficit.

Geithner said a failure to raise the debt ceiling in a timely way would push interest rates higher and spark "a financial crisis potentially more severe than the crisis from which we are only starting to recover." Both Geithner and Federal Reserve Chairman Ben Bernanke have said a failure to raise the ceiling could have "catastrophic consequences."

government shutdown 2011? - 16 things you need to know*
shutdown: 800,000 federal workers in the dark*
US government bracing for shutdown*