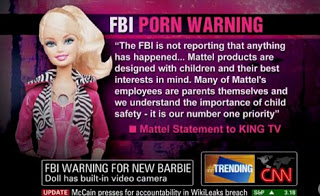 from threat level: A Barbie doll tricked out with a video camera concealed in her necklace could be used by predators to create child pornography, warns the FBI in a recent cybercrime alert. In the alert, mistakenly released to the press, the FBI expressed concern that the toy’s camera, which can capture 30 minutes of video and rivals a Canon 7D in quality, could be used to lure children and surreptitiously film child pornography. Barbie and other dolls have been used in the past by sexual predators to attract victims.

According to ABC News, which obtained a copy of the memo, the FBI appears to have opened an investigation into the doll. Mattel, the maker of Barbie Video Girl, noted in a statement that the FBI didn’t say it knew of any cases where the Barbie camera had been used for such nefarious purposes.

But a sheriff’s spokesman told ABC News that the FBI alert will be helpful for drawing attention to investigators collecting evidence at a crime scene. “When we’re doing a search warrant looking for media that a child pornographer may have used, we’re gonna have to put Barbie on the list just like any other cameras [and] computers,” said Sgt. John Urquhart from the King County Sheriff’s Department in Washington state.

related update: red ice radio on the history of the barbie doll