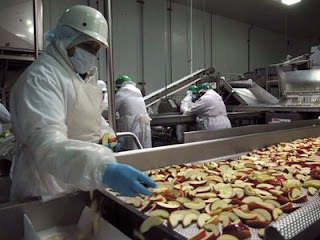 from delish: The expression "one bad apple spoils the bunch" may soon have to be retired. Okanagan Specialty Fruits, a Canadian biotechnology company, has petitioned the USDA for approval of its genetically modified "non-browning apple." The company is marketing the fruit as the "Arctic" while critics have taken to referring to them as "Botox apples" because they give a false impression of being young and healthy.

According to the company's website, scientists have developed Polypheunol Oxidase technology that essentially turns off the enzyme in the fruit that causes the browning reaction.