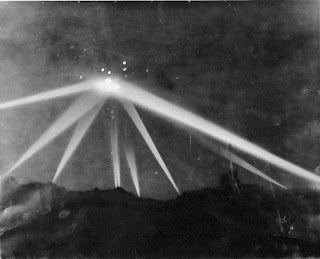 Air raid sirens first screamed at 2:25 am and the city of Los Angeles called for a blackout early on February 25, 1942. The 12,000 air raid wardens were shocked by what followed, from 3:36 am until 4:14 am, at least, 1,440 anti-aircraft shells were fired intermittently with deafening blasts. The UFO caught in the searchlights (pictured), did not fire and apparently was not harmed! There were six deaths as a result of the air raid, three by scrapnel and three heart attacks. The military announced it was a weather ballloon.  This enigmatic incident became known as the Battle of Los Angeles. Here is a link to the original CBS radio broadcast by Bryan Palmer on February 26, 1942.

An eyewitness, only identified as Katie, a volunteer air warden made the following observations, "It was a lovely pale orange and about the most beautiful thing you've ever seen. I could see it perfectly because it was very close. It was big!... They sent fighter planes up (the Army denied any of its fighters were in action) and I watched them in groups approach it and then turn away. There were shooting at it but it didn't seem to matter." The Japanese maintained after the war, they did not fly any aircraft that night over Los Angeles!

Here is a link to a more recent NBC recap of the night, which includes a brief interview with UFO researcher Jose Escamilla. Escamilla points out the obvious, "if they can't bring down a weather balloon with over 1,500 rounds of anti-craft scrapnel, 12 lb weaponry, what are they going to do with a real enemy target?" The incident proved too embarassing, and a possible explanation, why the battle over Los Angeles has gone underreported.

An interesting footnote, on March 5, 1942, General George C Marshall, wrote a top secret memo to the President, "regarding the air raid over Los Angeles it was learned by Army G2 that Rear Admiral Anderson...recovered an unidentified airplane off the coast of California ...with no bearing on conventional explanation...This Headquarters has come to the determination that the mystery airplanes are in fact not earthly and according to top secret intelligence sources they are in all probability of interplanetary origin."