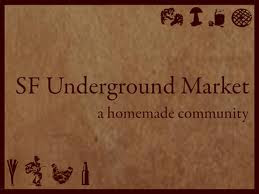 from nytimes: For the past two years, the San Francisco Underground Market has served up bacon-laced chocolates, sea salt and chili truffles, and other haute fringe food. But on June 11, the monthly market, which now draws more than a thousand visitors, received an unwelcome serving of its own: a cease and desist order from the San Francisco Department of Public Health. The market had positioned itself as a members-only club to circumvent the department’s retail food-safety permitting process. “They have significantly changed the scope of their operations,” raising health concerns, said Dr. Rajiv Bhatia, the director of environmental health for the health department. “If you have untrained vendors selling food to 1,200 people, you have a high-risk situation.” The market, founded by ForageSF, a business dedicated to wild food, has been held in a warehouse-size gallery space in the city’s Mission District that has applied for a permit but not yet received one. The market started small but has become a kind of foodie phenomenon. The idea has been to provide an incubator for the Bay Area’s fledgling food entrepreneurs, many of them young people who said they could not afford the steep fees of a conventional farmers' market. The department has not received complaints of illness, Dr. Bhatia said, but given the popularity of the market — arguably no longer “underground” — it now does not qualify as a club but is a retail food establishment under state law and subject to the standard permit process.