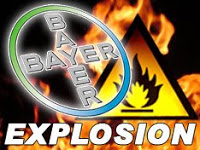 from ap: Federal officials are investigating the cause of a plant explosion that rocked an area west of Charleston, hurling a fireball hundreds of feet into the air, killing one worker and injuring a second.

Among many other chemicals, the Bayer CropScience plant produces methyl isocyanate, which killed at least 15,000 people in the infamous leak at a Union Carbide pesticide factory in Bhopal, India in 1984. But the chemical was not involved in the explosion, Kanawha County Emergency Management Director Dale Petry said, and was stored in steel-wrapped underground containers that were far from the blast.

"They have a lot of chemicals at the plant and they do take great steps to protect them," said Joe Thornton, spokesman for the state Department of Military Affairs and Public Safety. "I think everything that can be done to protect those chemicals is being done, and I think the public at large is safe."