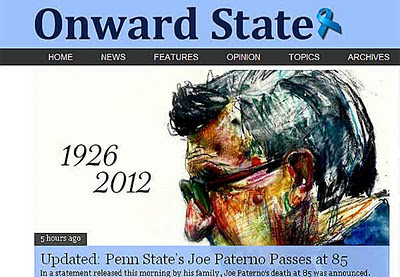 from latimes: Media organizations and an interested public sat on edge Saturday afternoon, knowing grim news could come at any moment. Just before 6 p.m. PST, it did. Onward State, a student news site at Penn State, tweeted that according to its sources legendary former Nittany Lions football coach Joe Paterno had died at 85. The news was jarring but not unexpected. Paterno had learned he had lung cancer in November shortly after being fired from his post in the wake of an explosive sex abuse scandal involving a former assistant coach, Jerry Sandusky. And, a few hours before Onward State's report, just before 3 p.m. Saturday, a newspaper in northeastern Pennsylvania had reported that Paterno had fallen gravely ill and that family and close friends had been summoned to say their final goodbyes. Onward State's report went viral and some media organizations, including CBSSports.com, went with the story. But it wasn't true.