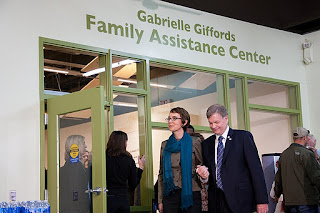 from tucsonsentinel.com: U.S. Rep. Gabrielle Giffords' last official act in her district was not a rousing speech to political supporters, nor a tearful resignation. Rather, she took a quiet tour of the good works others are doing in her honor. In what her office said was her final Tucson act as a member of Congress, Giffords paid a visit Monday to the Food Bank family assistance center named for her. Giffords, who announced Sunday that she would resign this week to focus on her recovery, quietly spoke with Community Food Bank of Southern Arizona staff and volunteers and toured the Gabrielle Giffords Family Assistance Center. She made no public comment and took no questions from the press. Her staff and plain-clothes security kept reporters at a distance. Giffords took a short tour of facility's warehouse, leaning on Food Bank CEO Bill Carnegie to steady her gait, which was affected when she was shot in the head on Jan. 8, 2011.