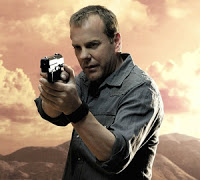 from steve watson: Former president Bill Clinton has told NBC's Meet The Press that America needs more intelligence agents who make their own rules and engage in whatever actions are necessary like Jack Bauer from the fictional TV show 24.

"I think what our policy ought to be is to be uncompromisingly opposed to terror--I mean to torture, and that if you're the Jack Bauer person, you'll do whatever you do and you should be prepared to take the consequences... And I think the consequences will be imposed based on what turns out to be the truth." Clinton said.

"If you have any kind of a formal exception, people just drive a truck through it, and they'll say, 'Well, I thought it was covered by the exception,'" Clinton added.

The question was again raised by host Tim Russert after Clinton told him last year that he would authorize torture in a "ticking bomb 24"-style situation.

Clinton went on to state “If you look at the show, every time they get the president to approve something, the president gets in trouble, the country gets in trouble. And when Bauer goes out there on his own and is prepared to live with the consequences, it always seems to work better.".

Clinton's comments represent another case of an influential political figure discussing the benefits of torture in the context of a fictional TV show character.