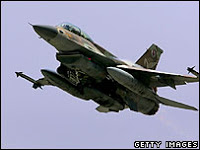 from bbc: Israel has confirmed that it carried out a strike on a Syrian military installation last month.

Syria accused Israel at the time but Israeli officials refused to comment, and the Israeli military censor imposed a strict blackout on information.

The censor's office has now allowed some details to be released.

On Monday, Syrian President Bashar al-Assad told the BBC that a Syrian military construction site was hit in the Israeli air strike on 6 September.

Israeli Army radio reported that Israeli planes attacked a military target "deep inside Syria", quoting the military censor. No further details were given.