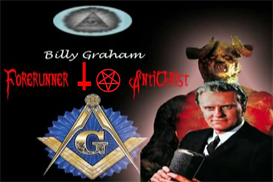 Most people think of Billy Graham as "America's Pastor" or the "Great Legitimator," whose  presence seemed to sanctify an event.  You Tube  presentation. "Billy Graham: Forerunner Anti-Christ," examines man's ministry and beliefs.  A closer look at Graham reveals an acceptance of homosexuality and support for One World Religion and One World Government.   The hour-long review of Graham and his ministry affixes label of an "apostate" preaching false gospel.  The present writer would, at one point in life, find such a label hard to accept - but facts speak for themselves.  It appears, Graham may be most successful deception ever!  Graham knighted by Queen Elizabeth in 2001 and his rank as 33rd degree Mason, attest to who Graham actually serves!  Evangelical history includes rise to prominence with Canvas Cathedrals (yes, tent sermons) in 1949 Los Angeles.  Canvas cathedrals seem from another world and Los Angeles lost to other side? Another pivotal moment in career, 1957 New York crusade ran nightly for 16 weeks.  It's a fascinating and relatively comprehensive look at Billy Graham and his ministry below fold!  Admission is free!