from time: It is a very 21st century conundrum: how can modern, open democracies provide basic homeland security in a world with nearly limitless mobility? On Wednesday, the European Commission tried to answer that by unveiling a border management plan calling for fingerprinting all foreign visitors to the European Union. 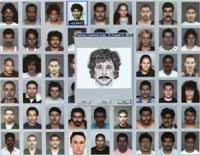 from washington post: The FBI yesterday announced the award of a $1 billion, 10-year contract to Lockheed Martin to develop what is expected to be the world's largest crime-fighting computer database of biometric information, including fingerprints, palm prints, iris patterns and face images.

Under its contract to build Next Generation Identification, the Bethesda contractor will expand on the FBI's electronic database of 55 million sets of fingerprints and criminal histories used by law enforcement and other authorities. The aim is to make the query and results process quicker, more flexible and more accurate.

from mcclatchy: In a major policy shift aimed at reducing a ballooning immigration backlog, the Department of Homeland Security is preparing to grant permanent residency to tens of thousands of applicants before the FBI completes a required background check... However, advocates of stricter immigration enforcement accused DHS of creating security loopholes, rather than solving the backlog problem.

from cnet: Starting May 11, Americans living in states that don't comply with new federal regulations could be barred from entering Washington D.C.'s visitor center and collecting the complimentary maps and brochures-unless they happen to bring a U.S. passport or military ID with them. That not-very-welcoming rule is part of a 2005 law called the Real ID Act, which takes effect in just over three months. It says that driver's licenses from states that have not agreed to Real ID mandates from the Department of Homeland Security, or which have not requested a deadline extension, can no longer be used to access "federal facilities."