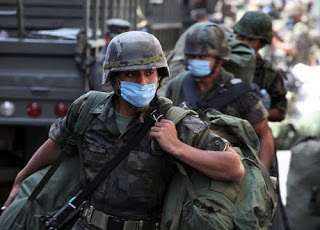 will americans obey govt orders during a swine flu pandemic?

from paul joseph watson: Local authorities are keen to know whether American citizens will obey the government in the event of an H1N1 pandemic and take the swine flu vaccine, amidst growing fears of quarantines and forced injections that have been circulating in recent weeks.

Every sign points to the fact that health authorities are preparing mass vaccination programs and quarantines that could be instituted should the H1N1 virus make a deadlier comeback, which has been all but guaranteed by U.S. health authorities as well as the WHO.

Part of those preparations include gauging the potential reaction of Americans to unpopular orders dictated by an increasingly distrusted government. How many citizens will follow orders to stay indoors, evacuate or take a shot?

Some of those questions form part of a survey being conducted by the University of Virginia’s health department targeting everyone except “federal government agencies and their employees,” who “are not qualified respondents for the survey target population,” according to an advisory sent with the survey.

The survey was forwarded to us by a reader who is part of a CEO-only networking group called MindShare in the Washington DC.

“I was sent the survey below that is probing folks in VA, MD, and Washington DC on what they would do in a pandemic or anthrax situation,” writes Etienne De La Boetie. “They appear to be trying to determine if folks will comply with government directives in either a flu pandemic or anthrax attack.”

The survey, entitled Community Shielding Shared Spectrum, was issued by the Critical Incident Analysis Group at the University of Virginia and can be read here.