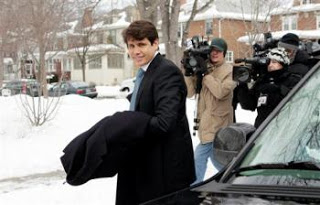 from washington post: The state senators stood up one by one in a hushed chamber on Thursday to call Gov. Rod Blagojevich (D) a liar and a hypocrite who put his ego and his pocketbook ahead of the interests of Illinois. One called him "devious, cynical, crass and corrupt." Another said the evidence of abuse of power was "overwhelming." A third said he was "without a doubt unfit to govern." Together, they voted 59 to 0 to reject Blagojevich's theatrical last-minute pleas and remove him from office, ending a stormy tenure that left the nation's fifth-largest state paralyzed by its governor's alleged misdeeds and nationally ridiculed for its latest bout of corruption. "I believe our state must enter rehab," Sen. Randall Hultgren (R) told his colleagues before the vote. "Moral rehabilitation."

video: blago called for kennedy, mccain & emanuel to be fired
from raw replay: Speaking at his Illinois senate impeachment trial, Gov. Rod Blagojevich said that if he was being impeached then Sens. Ted Kennedy, John McCain and President Obama’s Chief of Staff, Rahm Emanuel, should also be fired. RAW STORY has more details here. This video is from CNN.com, broadcast Jan. 29, 2009.