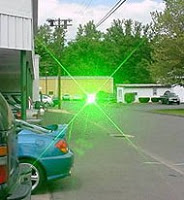 from danger room: The State Department has a high-tech solution to keeping its security contractors from killing any more Iraqi civilians unnecessarily: Give the mercs laser dazzlers and helmet cameras.

U.S. officials also tell ABC News that "the State Department plans to double the number of its diplomatic security agents to 90 so that one of its agents can accompany every convoy guarded by Blackwater and other private security contractors."

This isn't the first time the dazzlers - which temporarily blind its targets, with pulses of green laser light - have been pitched as life-savers for non-combatants in Iraq. (Better to fire light flashes than warning shots, the theory goes.) In May 2005, the Marines in Anbar province issued an "urgent" request for the dazzlers, which they said would cut down on civilian casualties. By February of this year, the Marines claimed that "close to 50 innocent Iraqis were killed and nearly 140 were wounded in Anbar between March and December by Marines who did not have the dazzlers as an alternative to lethal force."