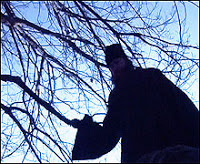 from abc: Local officials and negotiators from the Russian Orthodox Church spent the weekend unsuccessfully trying to convince a group of doomsday cult members to come out of the underground bunker they have been holed up in for weeks.

The groups leader, Peter Kuznetsov, ordered followers to take refuge in the bunker last month to await the end of the world, which he said would happen in May.

Kuznetsov has been arrested and is undergoing evaluation at a psychiatric hospital.

Russian television showed part of an exchange between Kuznetsov and a hospital doctor that aired Friday.