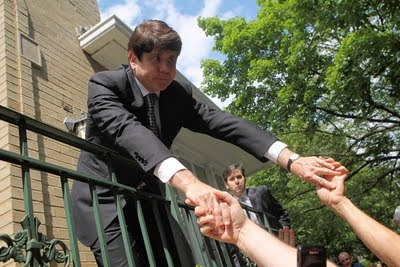 from dpa: Former Illinois governor Rod Blagojevich was on Monday found guilty on 17 of 20 corruption charges in connection with trying to sell the Senate seat held by US President Barack Obama before he took office. Blagojevich was found guilty last year of making false statements to federal investigators, but the jury was unable to reach a verdict on the other counts, setting the stage for a second trial.

He was found guilty of racketeering, extortion, soliciting a bribe and conspiracy. Some of those charges included shakedowns of a children’s hospital and a horse racing executive. He was acquitted on one count of shaking down a construction executive and a verdict was not reached on two other counts, the Chicago Tribune reported. The newspaper reported he faces a significant prison sentence.

Leaving the Chicago courtroom, Blagojevich said he was ‘very disappointed’ by the verdicts. ‘I, frankly, am stunned,’ said Blagojevich, who has professed his innocence.

Blagojevich, 54, had been accused of trying to sell Obama’s seat after he was caught on wiretap by federal investigators during a previous investigation. As governor, he had the power to appoint Obama’s successor in the Senate until an election could be held be held.

Blagojevich, a Democrat, was arrested in December 2008 – weeks after Obama won the presidential election – after being recorded in a profanity-laced conversation describing the Senate vacancy as a ‘golden’ asset for which he was seeking political or financial returns. The Illinois General Assembly impeached Blagojevich the following January and removed him from office.