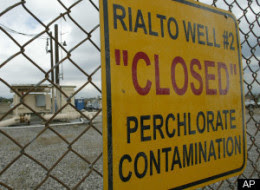 from anthony gucciardi: It is common knowledge that conventional produce contains a whole list of questionable chemicals and harmful pesticides. Linked to birth defects and lower IQ in children, conventional pesticides are known to be health disruptors. But what about organic produce? Perchlorate, a pollutant and powerful endocrine disruptor that is a key ingredient in rocket fuel, has been found in 32% of organic produce. In 2005 the Journal of Environmental Science and Technology published a study [1] on perchlorate levels in North America. They found:

Used by military defense contractors, aerospace programs, and various other military operations, perchlorate has been contaminated its way into drinking water, feed and edible plants, animals products, milk and breast milk, and both conventional and organic produce. It is so abundant in the food chain, in fact, that it has been found in virtually all humans tested [2]. The Colorado River is so thoroughly contaminated with perchlorate (1.5-8 micrograms per Liter) that 90% of the lettuce consumed during the winter months in the United States produced in the Lower Colorado River region was found to contain it [3].