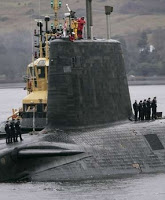 In what is expected to be among his last major acts as premier, Blair told the House of Commons that despite the end of the Cold War, potential threats were posed by North Korea, Iran and others.

"In these circumstances, it would be unwise and dangerous for Britain alone of any of the nuclear powers to give up its independent nuclear deterrent," he said.

Blair said Britain would cut back on its stock of nuclear warheads from 200 to 160 — a move intended to make the proposal more acceptable to detractors within his own party. But he said any decision to reduce the nuclear-armed submarine fleet from four to three would be made only after a new vessel is designed. Blair said advisers had ruled out land or air based alternatives as too costly and too vulnerable.

The existing submarine fleet will be phased out from 2022, defense officials said.