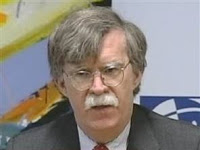 bolton resigns: one more neocon down

from ap/msnbc: Unable to win Senate confirmation, U.N. Ambassador John Bolton will step down when his temporary appointment expires within weeks, the White House said Monday.

Bolton’s nomination has languished in the Senate Foreign Relations Committee for more than a year, blocked by Democrats and several Republicans. Sen. Lincoln Chafee, a moderate Republican who lost in the midterm elections Nov. 7 that swept Democrats to power in both houses of Congress, was adamantly opposed to Bolton.

Critics have questioned Bolton’s brusque style and whether he could be an effective bureaucrat who could force reform at the U.N.

President Bush gave Bolton the job temporarily in August 2005, while Congress was in recess. Under that process, the appointment expires when Congress formally adjourns, no later than early January.

The White House resubmitted Bolton’s nomination last month. But with Democrats capturing control of the next Congress, his chances of winning confirmation appeared slight. The incoming chairman of the Senate Foreign Relations Committee, Democratic Sen. Joe Biden of Delaware, said he saw “no point in considering Mr. Bolton’s nomination again.”