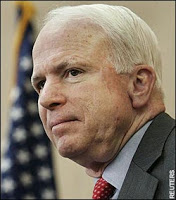 from raw story: At a stop on Senator John McCain‘s “Straight Talk” tour, the 2008 presidential candidate decided to respond to a question with some bars of a song, but it is unlikely that Arizona’s Republican senator will be reaching the final rounds of Fox’s “American Idol.”

Speaking at Murrells Inlet VFW Hall in South Carolina, McCain was asked when he thought the US Military might “send an air mail message to Tehran.”

“McCain began his answer by changing the words to a popular Beach Boys song,” the Georgetown Times reports.

McCain then added, “Iran is dedicated to the destruction of Israel. That alone should concern us but now they are trying for nuclear capabilities. I totally support the President when he says we will not allow Iran to destroy Israel.” [editor’s note: that’s israel’s job]

The paper notes that McCain stopped short of answering the actual question and did not say if he supports an invasion of Iran.

Later, McCain campaign spokesman Kevin McLaughlin told ABC News that the senator “was just trying to add a little humor to the event.”

ABC’s report adds, “On a more serious note, however, McCain has long been an advocate of dealing with rogue states aggressively. Back in 2000 when then-Gov. George W. Bush was wary of nation building and talking about a foreign policy based on humility and restraint, McCain was advocating a policy of ‘rogue-state rollback,’ which he described in a 1999 speech to the Center for Strategic and International Studies as a ’21st century interpretation of the Reagan doctrine.'”