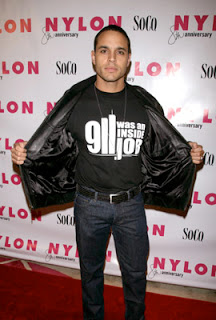 from 9/11 blogger: Daniel Sunjata, co-star of the critically-acclaimed FX Network television series, Rescue Me, spoke out today for 9/11 Truth. In a lengthy statement to the PatriotsQuestion911.com website, Sunjata offered his thoughts about how a small group within our military and government could have been complicit in the terrible events of 9/11.

Sunjata is a versatile actor who received a Tony Award nomination for Best Actor for his starring role in the Broadway play, Take Me Out. He appeared in Woody Allen’s 2004 film, Melinda and Melinda and in the 2006 movie The Devil Wears Prada with Meryl Streep. He plays the starring role of Reggie Jackson in the upcoming ESPN mini-series, The Bronx is Burning.

“I would like to respond to the question, ‘How could a small group within our military and government have been complicit in the terrible events of 9/11 without the entire government being aware of it?’

My response is that the whole government would not have to be in on the alleged conspiracy for the following reason; our government is a hierarchy in which compartmentalization of knowledge is a given. As suggested by the symbol of the pyramid, the tier below does not necessarily know everything that the tier above knows, and the tiers above that are privy to even more sensitive and ‘classified’ intelligence and so on. Even within common tiers you see this compartmentalization where ‘the left hand knows not what the right hand is doing.’

Sounds dark and conspiratorial but that’s the fact. In fact it is the official excuse given by the establishment for how such a thing as 9/11 could have happened on their watch…

For instance, the NORAD and FAA air-traffic controllers could well have been ignorant of the alleged plot, yet innocently participated in its being carried out. The commonly accepted stance of those urging for a truly independent reinvestigation of 9/11, is that it is a rogue faction within our government and military who hatched and perpetrated this unholy atrocity through the agency of our ISI funded assets like Osama Bin Laden and Al Qaeda (ISI is the Pakistani version of our CIA, created and funded by our CIA).

One strong piece of evidence in this regard (albeit circumstantial, though one would expect that FEMA, NIST and The 9/11 Commission would have probed this with duly diligent scrutiny) is the fact that India’s press and subsequently the FBI both reported that Mohammed Atta had received a $100,000.00 money transfer from the head of Pakistani ISI, Chief Lt. General Mahmoud Ahmed, three days before the attack. Also General Ahmed was in the U.S. from approximately Sept 9th to Sept. 13th (DURING THE ATTACK) meeting with (among others) George J. Tenet, the then CIA Director, and Porter Goss, the future Director of the CIA.

Isn’t it reasonable to subpoena General Ahmed and those he secretly met with during the 9/11 attacks and question them under oath regarding the substance of their discussions and the nature of their relationships? Especially given the public record of ISI’s dealings with and funding of known terrorist organizations, one of which happens to be Al Qaeda, and the revelation of the general’s $100,000 ‘donation’ just before the murder of 2972 souls?

It is the avoidance of such obvious questions as these, of which there are literally hundreds (most of them posed by The Family Steering Committee during the 9/11 Commission’s so called investigation) which begs greater scrutiny of the official story. When a 7 year old girl is found raped and dead in the cellar of her family home, as painful and politically incorrect as it may be to question and treat as suspects the parents who claim to have been sleeping soundly during the rape and strangulation of their loved one… such protocols are standard procedure in homicidal investigations.

Shouldn’t the same protocols be followed in the case of domestic mass slaughter, where a government who claims to have been asleep at the wheel during the said atrocity is partially staffed and run by people who have published a document outlining a 30 year plan for global economic and military hegemony and ‘full spectrum dominance‘ characterized by a permanent military presence in the middle east and cheap access to that regions oil reserves? Especially when the same document states that ‘this process of transformation is likely to be a long and arduous one, absent some cataclysmic and catalyzing event like A NEW PEARL HARBOR?‘

Speaks to possible motive, no? I say yes. What say you?

Here is a link to the documentary, 9/11: Press For Truth, the first-person account of The Jersey Girls [Kristen Breitweiser, Patty Casazza, Monica Gabrielle, Mindy Kleinberg, and Lorie Van Auken]; four widows who lobbied 441 days to get the Bush administration to open an investigation into the events on (and leading up to) 9/11. They helped spearhead The Family Steering Committee, did years of research in the process, and felt that 70% of the burning questions they had posed on behalf of the victim’s families went completely unanswered, since to address them would have lead the Commission into ‘painful and politically incorrect’ territory. Do their words carry any weight, or are they just crazy conspiracy theorists as well? You decide…”

and finally, here is daniel on resistance radio…