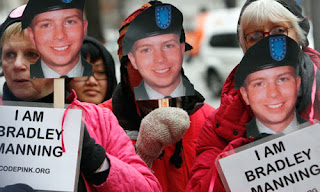 from theguardian.com: Transparency campaigners condemned the harsh sentence in prospect for Bradley Manning, but journalists and lawyers closely associated with the trial were relieved with the acquittal for the most serious charge – that he "aided the enemy" by transmitting state secrets to WikiLeaks. In a statement, Manning's family said they were disappointed by so many guilty findings – he was deemed to be guilty of 17 of the 22 counts against him in their entirety and three others in an amended form. But the statement, written by a US-based relative, said the family was "happy that Judge Lind agreed with us that Brad never intended to help America's enemies in any way."