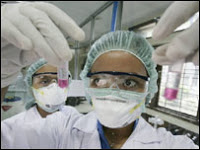 britain plans flu shots for everyone

from ap: The government unveiled plans Thursday to provide vaccinations for the entire population in the advent of a flu pandemic.

Health Secretary Alan Johnson said a flu pandemic was "one of the most severe risks" facing the country, telling lawmakers that he had signed an agreement to secure the delivery of enough pandemic flu vaccines to cover every citizen.

Experts will formulate the vaccination once the strain of the virus has been identified. Officials said it was impossible to predict when the next pandemic would strike and what form it would take.

The last global flu pandemic - Hong Kong flu - struck in 1968, leading to approximately 1 million deaths worldwide and 80,000 in Britain, said a Department of Health spokeswoman, speaking on condition of anonymity in line with department policy.

"We don't believe an influenza is imminent," the spokeswoman said.

The World Health Organization recently praised Britain for its preparedness to tackle a global flu outbreak.