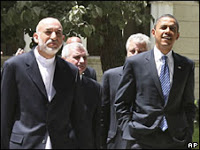 obama arrives in afghanistan
from ap: Democratic presidential contender Barack Obama arrived in Afghanistan on Saturday, the first stop on a campaign-season tour of war zones, a spokesman said. Less than four months before the general election, Obama's first visit to Afghanistan, with a subsequent stop in Iraq, was rich with political implications, although the Illinois senator flew as part of an official congressional delegation.

from afp: US Democratic presidential hopeful Barack Obama on Sunday met here with Afghan President Hamid Karzai, who has been criticised by the Illinois senator for not doing enough to rebuild his war-torn country. An official in Karzai's office told AFP the talks had taken place in the capital, but gave no details about the meeting. Obama has made Afghanistan a key focus of his foreign policy pledges, saying it - not Iraq - should be the focus of the so-called "war on terror" and promising to send more troops to battle insurgents here if elected.

Republican presidential candidate John McCain said on Friday that his Democratic opponent, Barack Obama, is likely to be in Iraq over the weekend... "I believe that either today or tomorrow - and I'm not privy to his schedule - Sen. Obama will be landing in Iraq with some other senators" who make up a congressional delegation, McCain told a campaign fund-raising luncheon.

Josh Marshall points out that there's something very wrong with this. The Reuters piece hints at it. But if Obama is going to be in Iraq this weekend, this is a major breach on McCain's part.