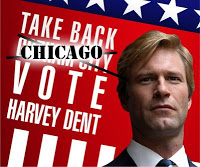 from ethan allen: Coincidence or art imitating life? The slow downward spiral towards fascism grabs some fast momentum with a bit of slight-of-hand propaganda from the new Batman movie, 'Dark Knight.' The recent push towards open martial law in Chicago is an eerie reflection of the Dark Knight production, which filmed many of its Gotham scenes in downtown Chicago last summer. In the film, the Joker (Heath Ledger) creates so much chaos and violence that the National Guard (Gotham National Guard) is brought in to suppress riots and restore order. During filming, extras were dressed up as national guard troops with many seen by many Chicago natives acting in scenes and also providing 'security' for the civilian extras during takes. Military helicopters, armored vehicles and hundreds of uniformed extras maneuvered in downtown Chicago for several days while their scenes were filmed, creating the atmosphere, albeit a fictional one, of open martial law and military code of conduct for all citizens. One scene is described below:

And another, this one from someone who witnessed some of the filming during the Chicago production:

"After the interviews, we moved to a corner space in the building with huge windows so we could watch Chris direct a spectacular scene: Two National Guard helicopters carrying troops flying so low and close together over the Chicago River. Extras dressed as rifle-carrying National Guard troops were down on the streets."

And now, a short one year later, we have the governor of Chicago calling for national guardsmen to be used to suppress violence and crime in the windy city... 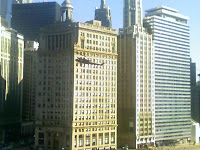 While real world crime rates don't move and flow with the production of Hollywood movies, it seems odd that things would get so out of control in a city where only a year earlier the Joker was rampaging and causing all kinds of anarchy. Be it a Batman super villain or crips and bloods, the order out of chaos formula is in full effect. The image of troops goose stepping through the streets in Chicago was the scene of a major motion picture production, and now it will soon be in real time. Boots on the ground, in your face fascism is coming to a city near you, brought to you by the Pentagon planners and a few friendly Hollywood movies. What was fantasy is now reality, only we don't have a real Batman to help us.