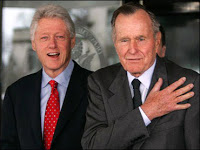 from truthnews: First thing president Hillary will do is send two mass murderers out to “repair the damage done to America’s reputation,” according to CNN.

And who are these two criminals? None other than president Hillary’s husband and Bush Senior. As you may recall, Bill Clinton is more or less the adopted son of the Bush crime family. It makes sense then these two criminals — guilty of together killing well over a million innocent Iraqis, 500,000 of them children — will be sent, as people around the world understand, more than the American people do, that these two guys mean business.

It is all the fault of the rogue son, Dubya, and Bill and Poppy will make it all better.

Be afraid, be very afraid.