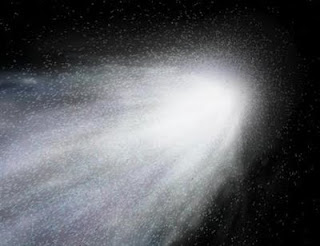 from reuters: The amino acid glycine, a fundamental building block of proteins, has been found in a comet for the first time, bolstering the theory that raw ingredients of life arrived on Earth from outer space, scientists said on Monday. Microscopic traces of glycine were discovered in a sample of particles retrieved from the tail of comet Wild 2 by the NASA spacecraft Stardust deep in the solar system some 242 million miles (390 million km) from Earth, in January 2004. Samples of gas and dust collected on a small dish lined with a super-fluffy material called aerogel were returned to Earth two years later in a canister that detached from the spacecraft and landed by parachute in the Utah desert. Comets like Wild 2, named for astronomer Paul Wild (pronounced Vild), are believed to contain well-preserved grains of material dating from the dawn of the solar system billions of years ago, and thus clues to the formation of the sun and planets.