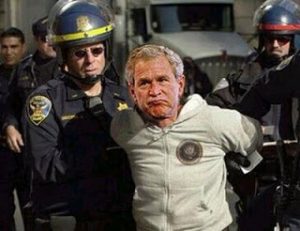 from reuters: Former President George W. Bush has canceled a visit to Switzerland, where he was to address a Jewish charity gala, due to the risk of legal action against him for alleged torture, rights groups said on Saturday. Bush was to be the keynote speaker at Keren Hayesod‘s annual dinner on February 12 in Geneva. But pressure has been building on the Swiss government to arrest him and open a criminal investigation if he enters the Alpine country. Criminal complaints against Bush alleging torture have been lodged in Geneva, court officials say. Human rights groups said they had intended to submit a 2,500-page case against Bush in the Swiss city on Monday for alleged mistreatment of suspected militants at Guantanamo Bay, the U.S. naval base in Cuba where captives from Afghanistan, Iraq and other fronts in the so-called War on Terror were interned.

One response to “Bush Cancels Visit to Switzerland After Arrest Threat”