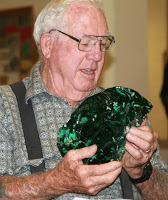 Ranchers John Ellis and Alf Williamson witnessed the crash of an “aerolite” on June 6th, 1884 northwest of Max, NE in Dundy county. In the state’s southwest corner, the county seat is Benkelman. A 2007 Daily Nebraskan article, “Nebraska may have had its own Roswell in 1884,” recounts the cowboys’ eyewitness accounts of this relatively obscure sighting. The two men thought, at first, it was a meteorite, but changed their minds when they saw the craft leave a swath, 20 x 80 feet, of molten sand. A fascinated Williamson could not turn himself away and suffered burns to his face. The object, estimated to be 60 ft long and cylindrically shaped with a 12 ft radius, left behind debris described as metal cogs and propeller screws. John Buder, a MUFON of Nebraska researcher, believes the incident spawned many that followed, including the 1897 Aurora, Texas airship mystery. “It was the second UFO crash Buder knows of, and the first to be recorded in newspapers of the time. But once the story came out, it started a worldwide wave of similar stories..”

A 2009 article, “Nebraska UFOs: Is There Anybody Out There?” offers UFO researcher Dale Bacon’s perspective. Bacon recounts the incident, also, as an entertaining storyteller on YouTube, the Benkelman Nebraska, UFO Mystery. The researcher employs the historically accurate “aerolite”, a reminder the term Unidentified Flying Object (UFO) was only first suggested in 1952 by Edward Ruppelt, head of Project Bluebook. Details may vary as Bacon describes the object at 12 x 6 feet. There are no surviving metal objects to corroborate the story, as a newspaper reported, after a hard rain two days later at a time when the object was still too hot, melted the craft, “like a spoonful of salt in water”. This news account hurt the story’s credibility at the time.

John Hubert (pictured), a High Plains Historical Society director, inspects a green glob of glass that may have been created in the 1884 crash as reported in a 2009 McCook Daily Gazette article. Robert Golka, a MIT scientist, is also interested and scours the country for samples, he observes “…green glass would correspond with the high temperatives involved”. It’s noted green glass is also produced from atomic blasts. The Benkelman UFO incident still has standing as a relatively credible though obscure story. Buder believes, ” …there’s only a few dozen people in Nebraska who even know about it”.

One response to “Nebraska’s 1884 Roswell”