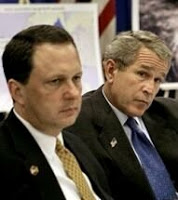 from raw story/blacklisted news: President Bush yesterday issued a national security directive that would, in the event of a catastrophic attack on the federal government, assign the responsibility of running a shadow government to the White House, not the Department of Homeland Security, according to a Washington Post report:

"The order makes explicit that the focus of federal worst-case planning involves a covert nuclear attack against the nation's capital," the report says, "in contrast with Cold War assumptions that a long-range strike would be preceded by a notice of minutes or hours as missiles were fueled and launched."

The President's directive states that "Emphasis will be placed upon geographic dispersion of leadership, staff, and infrastructure in order to increase survivability and maintain uninterrupted Government Functions."

According to the report, "Other former Bush administration officials said the directive formalizes a shift of authority away from the Department of Homeland Security to the White House."

The report continues, "Under an executive order dating to the Reagan administration, responsibility for coordinating, implementing and exercising such plans was originally charged to the Federal Emergency Management Agency and later DHS, the Congressional Research Service noted in a 2005 report on a pending DHS reorganization..."

"The new directive gives the job of coordinating policy to the president's assistant for homeland security and counterterrorism -- Frances Fragos Townsend, who will assume the title of national continuity coordinator -- in consultation with Bush's national security adviser, Stephen J. Hadley, with the support of the White House's Homeland Security Council staff. Townsend is to produce an implementation plan within 90 days. Homeland Security Secretary Michael Chertoff will continue to coordinate operations and activities, the directive said."