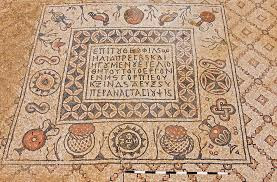 from news.discovery.com: The remains of a 1,500-year-old monastery with intact mosaics covering the floor have been unearthed in southern Israel, the Israel Antiquities Authority announced Tuesday (April 1). The Byzantine complex — which was discovered near Hura, a Bedouin village in the northern Negev Desert — measures 65 feet by 115 feet. It is arranged on an east-west axis, a common feature in Byzantine churches, and a prayer hall and dining room are decorated with elaborate mosaics that show geometric patterns, leaves, flowers, baskets, jars and birds.

These tiles have managed to retain their vibrant blue, red, yellow and green colors over the centuries. The floor decorations, IAA officials say, include inscriptions in Greek and the Syriac language, which contain rather helpful information for historians: the names of the monastery's abbots — Eliyahu, Nonus, Solomon and Ilrion — and the dates on which each floor was laid down during the second half of the sixth century A.D.

"It seems that this monastery, located near the Byzantine settlement of Horbat Hur, is one ... in a series of monasteries situated alongside a road that linked Transjordan with the Be'er Sheva Valley," Daniel Varga, who was leading excavations at the site for the IAA, said in a statement.

The discovery was made during a salvage excavation ahead of construction of an interchange on southern Israel's Highway 31. Israeli officials say they plan to relocate the monastery, including its mosaics, to the Wadi 'Attir agricultural and tourism project next to Hura.

Salvage excavations are common in archaeologically rich locales like Israel, where construction and development projects could cover up or damage hidden ruins. Before Israel's Highway 38 could be widened in Eshtaol, archaeologists dug several trenches on the side of the road and discovered a 10,000-year-old house, one of the oldest dwellings in the region.

Ahead of the construction of a bridge along Highway 44, excavators found traces of a 900-year-old wealthy estate with a garden and mosaic fountain. During expansions to Highway 1 last year, excavators found a carving of a phallus from the Stone Age.