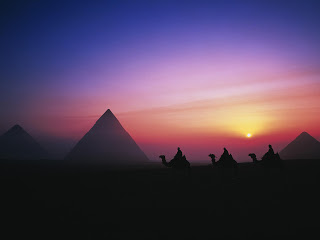 from www.aina.org: According to several reports in the Arabic media, prominent Muslim
clerics have begun to call for the demolition of Egypt's Great
Pyramids--or, in the words of Saudi Sheikh Ali bin Said al-Rabi'i, those
"symbols of paganism," which Egypt's Salafi party has long planned to
cover with wax. Most recently, Bahrain's "Sheikh of Sunni Sheikhs"
and President of National Unity, Abd al-Latif al-Mahmoud, called on
Egypt's new president, Muhammad Morsi, to "destroy the Pyramids and
accomplish what the Sahabi Amr bin al-As could not." This is a
reference to the Muslim Prophet Muhammad's companion, Amr bin al-As and
his Arabian tribesmen, who invaded and conquered Egypt circa 641. Under
al-As and subsequent Muslim rule, many Egyptian antiquities were
destroyed as relics of infidelity. While most Western academics argue
otherwise, according to early Muslim writers, the great Library of
Alexandria itself--deemed a repository of pagan knowledge contradicting
the Koran--was destroyed under bin al-As's reign and in compliance with
Caliph Omar's command. However, while book-burning was an easy
activity in the 7th century, destroying the mountain-like pyramids and
their guardian Sphinx was not--even if Egypt's Medieval Mamluk rulers
"de-nosed" the latter during target practice (though popular legend
still attributes it to a Westerner, Napoleon). Now, however, as
Bahrain's "Sheikh of Sheikhs" observes, and thanks to modern technology,
the pyramids can be destroyed. The only question left is whether the
Muslim Brotherhood president of Egypt is "pious" enough--if he is
willing to complete the Islamization process that started under the
hands of Egypt's first Islamic conqueror.