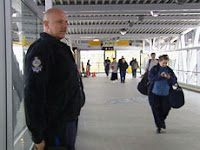 from cbc: Transit police on SkyTrain stations in Metro Vancouver have used Taser stun guns on passengers who didn't pay the fare and tried to run away, CBC News has learned.

Stunning someone without a transit ticket doesn't qualify as an appropriate use of a Taser, said Murray Mollard, executive director of the B.C. Civil Liberties Association.