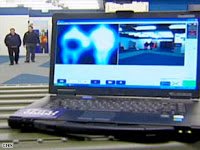 from cnn: New technology that can "see" through clothing and detect what's underneath can now be used to scan crowds, making it a potentially effective tool to prevent terrorist attacks in public places.

The ThruVision T5000 camera picks up Terahertz rays, or T-rays, which are naturally emitted by all objects and can pass through fabric or even walls.

The camera can then image metallic and non-metallic objects hidden under clothing on still or moving subjects without revealing any body detail, according to its British manufacturer, ThruVision Limited.

While similar technology is being unveiled at airports around the world, the T5000 is designed to be used in large, open areas. With a range of 25 meters, the T5000 can screen people in public places, thus avoiding bottlenecks at border crossings or security checkpoints.

It also means people can be screened without knowing it.