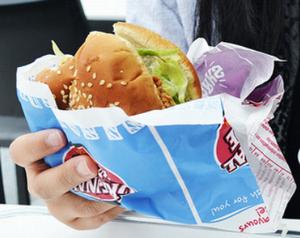 Chemicals In Fast Food Wrappers End Up In Human Blood

from allgov: As if the food in fast food wasn’t questionable enough from a health standpoint, it turns out the wrappers used for hamburgers, chicken sandwiches, microwave popcorn, etc. contain chemicals that are leaching into the human body.

Researchers at the University of Toronto found that fast food wrappers have perfluorinated carboxylic acids (PFCA) in them - synthetic chemicals designed to keep grease from leaking through. These same chemicals, which repel oil, grease and water, are also found in carpets and clothing.

Too much of these chemicals in human blood can help cause changes in sex hormones and cholesterol levels.

Governments in the United States, Canada and Europe have been reluctant to regulate polyfluoroalkyl phosphate esters, or PAPs, the breakdown products of PFCAs. According to Scott Mabury, the lead researcher on the study, regulators have made three assumptions regarding PFCAs: “That the chemicals wouldn't move off paper into food; they wouldn't become available to the body; and the body wouldn't process them. They were wrong on all three counts.”