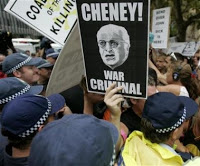 cheney arrival is met with protests

from the west australian: US Vice-President Dick Cheney’s arrival in Sydney last night was met with a city in lockdown and a taste of protests to come.

He chatted briefly before climbing into a black limousine and being whisked away under escort.

A strong security presence was in place for the Vice-President, who is in Australia for three days of talks on topics including the war in Iraq, with scores of police on the tarmac. Helicopters also circled above. 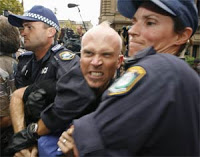 Unfortunately, 10 protesters were arrested when scuffles broke out between police at a rally near Sydney Town Hall.

Organised by the Stop the War Coalition, things turned nasty when about 200 people attempted to break a line of police and march to the US Consulate.

But police, supported by mounted officers, held their positions.

Mr Cheney arrived in Australia after having spent two days in Japan discussing security issues and visiting troops on the US island of Guam.

He will hold talks with Prime Minister John Howard and Opposition Leader Kevin Rudd, as well as make a major policy speech.