talk about a pleasant october surprise… 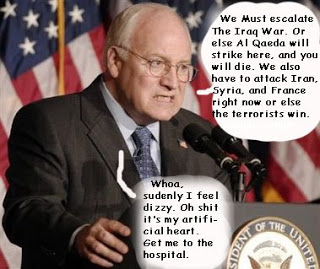 There was no reason given for the cancellation, until the Associated Press reported a few hours later that Cheney experienced an abnormal heart rhythm, and that he would have to “visit George Washington University Hospital for an outpatient procedure to restore his normal rhythm.”

“Cheney’s press secretary Megan Mitchell said that during a visit with doctors Wednesday morning, it was discovered that the vice president was having a recurrence of atrial fibrillation – an abnormal rhythm involving the upper chambers of his heart,” the AP reported.

MSNBC reports, “Cheney, 66, has a history of heart problems including four heart attacks, quadruple bypass surgery, two artery-clearing angioplasties and an operation to implant a defibrillator six years ago. In July 2007 he had surgery to replace the defibrillator that monitors his heartbeat.”

According to the Tribune, Cheney was slated to attend a private, closed to the media fundraiser at Ozinga’s house in Homer Glen in Illinois.